When voicemail first arrived on the mainstream business landscape, it was greeted with massive excitement and enthusiasm. In fact, people used to call their own voicemail to leave reminders and notes. It was glorious.

But that was then. Today, voicemail is viewed by some employees as a liability instead of an asset. And the biggest reason for this isn’t the few seconds it takes to pick up a voicemail.  Rather, it’s because most of the time, there is no message to pick up at all.

Indeed, CRM.com has found that businesses experience up to 75 percent voicemail abandonment — i.e. callers hang up (or hit the end button) the moment they hear something like “I’m not in the office, but if you leave a message…” What Started this Vicious Cycle?

And so, this begs the question: what caused voicemail to go from being adopted, to being avoided? It doesn’t make sense that callers would suddenly start disliking (or hating) leaving voicemail messages — which only take a few seconds.

No, what callers generally loathe about voicemail is that it’s no longer working for them. That is, they don’t have confidence that voicemails will be picked up in a timely manner, and that they will get a call back (or whatever other desirable action they request).

And so, the problem just gets worse and worse: callers don’t leave voicemails, employees don’t pick them up, which leads to fewer voicemails…and the vicious cycle continues. Clearly, something new must be brought into the picture to change the paradigm and turn voicemail from a liability back into an asset. And that game-changing solution is a hosted cloud phone system’s voicemail-to-email feature.

Like other hosted cloud features, voicemail-to-email is remarkably easy to understand (i.e. you don’t have to be a telecommunications wizard or have a PhD in Computer Science to grasp the essence).

Basically, here is how it works: instead of lingering for days, weeks, or maybe forever in an old fashioned PBX system, voicemails delivered to a hosted cloud phone system are instantly and automatically forwarded to a recipient’s email inbox as an MP3 attachment, which they can listen to wherever they are. In addition, the recipient receives important call data, such as the time/date, as well as the caller ID information. 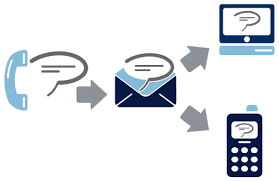 As a result of this new piece of the voicemail puzzle, three major benefits are unleashed:

In most cases, speaking to callers in real-time is always preferred to voicemail (the exception being when callers themselves sometimes don’t want to have a conversation, but instead want to leave a quick message).

However, expecting employees to be constantly available isn’t realistic or efficient. That’s where hosted cloud’s voicemail-to-email enters the picture and changes the game. Voicemail isn’t a liability anymore, it’s an asset!

Voicemail-to-email is one of the MANY carrier-grade features that we offer in our advanced and affordable hosted cloud phone system solution. Contact us today at (336) 544-4000 for a live guided tour. Your consultation with us is FREE.