Security is a top-of-mind concern these days and for good reason. The costs of a data breach can be significant — and in some cases enormous. For example, the Target breach in 2013 ultimately ended up costing the company a cool $162 million. And who can forget the Epsilon breach back in 2011? The price tag for that incident? Four (cue Dr. Evil voice) BILLION dollars.

Of course, most data breaches aren’t as staggeringly expensive as these notorious cases. However, all breaches are costly and can take several weeks, months, or even years to investigate and clean up. And we haven’t even mentioned reputation damage and potential lawsuits, which only add to the financial burden.

Regardless of whether your business stands to lose $1,000, $10,000 or $100,000 or more, the bottom line is that you want to take steps that prevent the chances that you’ll be victimized by a data breach. And that’s why — and contrary to what you may have been told — it’s smarter and safer to switch from an on-premise landline phone system to a state-of-the-art cloud phone system.

Here are the five key reasons why a cloud phone system can be MORE SECURE than a landline phone system:

The bottom line? Shifting your phone system from the ground to the cloud isn’t just about saving thousands of dollars each year, empowering your remote workers, and improving customer experience. It’s also about being SAFER. Indeed, in a Microsoft survey, 94% of businesses said that their security improved after adopting cloud-based applications!

Schedule your live guided demo and discover all the benefits of our state-of-the-art cloud phone system, including stronger security and more peace of mind. We’ll connect with you over-the-web at a time/day that suits you and your team.

Call us at (336) 850-5400 or chat with us during business hours by clicking the chat icon on the lower-right of your screen. We are a local Greensboro, North Carolina-based business with over 100 5-star reviews!

Why Customers HATE Having their Call Transferred & What to Do About ItBlog, Cloud Phone System, Cloud-based VoIP for Business, News 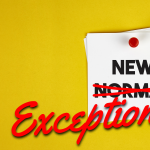 Would You Rather Live in The New Normal or The New Exceptional?Blog, Business Growth, Business Technologies, Customer Service, Economy