A virtual private network (VPN) encrypts traffic between a device (e.g. computer, laptop, tablet, or smartphone) and a network. Since hackers don’t have the encryption key, they can’t snoop and steal data. That’s the good news.

The bad news is that because millions of people are working from home right now due to the coronavirus pandemic, VPNs are getting overloaded with traffic. Reports show that the global use of some VPNs has increased by 165 percent since March 11. This is causing some remote workers to experience sluggish data connectivity speeds, which is making it frustrating (and sometimes impossible) to participate in video conferences or stream videos.

VPNs are a MUST!

If your remote workers are experiencing a slowdown due to VPN use, then they may be tempted to turn it off. Don’t let them do this! What they gain in speed they’ll lose in security. And considering that the cost of a data breach can be enormous, it’s simply not worth the risk. Remember: many hackers are aggressively targeting remote workers at this time, and will use the information they steal to invade the corporate network.

The second warning is that your remote workers may be inclined to shut down their anti-virus, anti-malware, and anti-spyware software, in order to speed things up (since these programs run in the background and use bandwidth and resources). Again: don’t let them do this! It would be like putting a deadbolt on the front door of a house, but leaving the windows wide open.

7 Tips to Speed Up VPNs

If your remote workers should never shut down their VPN or anti-virus/anti-malware/anti-spyware software, what can they do to speed up their data connection and carry out their day-to-day tasks? Here are 7 tips that can make a significant difference, and which do not require a high degree of technical proficiency (although some basic knowledge is necessary):

VPN vendors have geographically dispersed servers. For example, they may have a server in Raleigh, a server in Atlanta, a server in Miami, and so on. One way to potentially increase data connection speed is by changing the server to one that is closer (e.g. if a remote worker is in Raleigh, then they are likely to have a faster connection if they choose the Raleigh-based server instead of the Miami-based server).

Sometimes, a simple software update to the latest version is enough to boost speeds, as issues and bugs can cause slowdowns.

Most Wi-Fi routers these days support two types of bands: 2.4 GHz and 5 GHz. If your remote workers are working near their router (e.g. same floor of the house), then they might find it much faster to switch to the 5 GHz band.

However, 5 GHz struggles to penetrate walls, furniture, and other solid objects. As such, switching from 2.4 GHz to 5 GHz might slow things down instead of speed things up. If this is the case, then remote workers have three options: get a range extender, use a hardwired Ethernet connection (i.e. they plug their computer/laptop directly into the router), or switch back to 2.4 GHz.

4. Turn Off SOME Background Apps that Aren’t Immediately Needed

As mentioned above, you DON’T want your remote workers turning off essential security software such as anti-virus/anti-malware/anti-spyware, because that puts them — and your business — at risk.

However, it can be worthwhile to shut down (if only temporarily) non-security programs and apps that are running in the background, and which are taking up resources and bandwidth such as Dropbox, various non-security software updaters, and so on.

5. Switch the Protocol from TCP to UDP

There are many technical differences between UDP and TCP. However, generally speaking UDP supports faster connections, while TCP supports more stable connections. As such, if the VPN that your remote workers are using is connecting through TCP, then switching to UDP should speed things up (this can typically be done in the VPN configuration settings). But keep in mind that this could potentially lead to some intermittent connectivity problems. If so, then they’ll need to switch back to TCP.

Some VPN vendors pledge blazing-fast speeds, but it’s an empty promise. Changing vendors might be necessary.

Lastly, if doing all of the above doesn’t boost speeds to acceptable levels, then the root problem might be with the ISP itself. If so, then remote workers may need to upgrade their package. If this isn’t an option or if the costs are excessive, then it may be necessary to change the ISP.

At Carolina Digital Phone, our goal is to help all businesses — not just our customers — stay productive and safe during this very challenging time. We hope that you and your remote workers find the above advice helpful. We will be sharing more tips and tricks in the days and weeks ahead. Stay tuned! 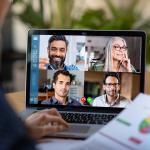