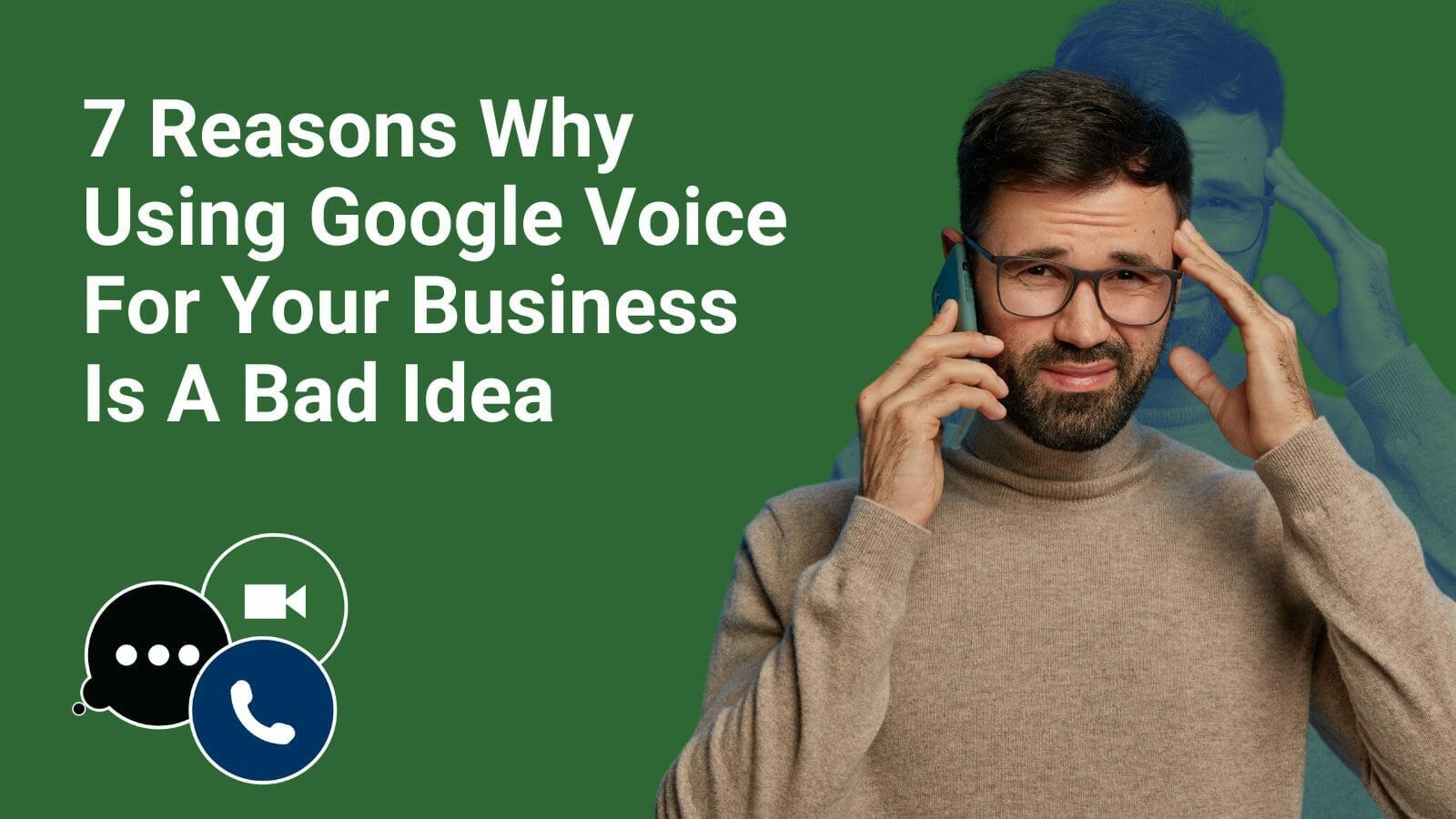 For many things “Google is your friend” is good advice. But there are exceptions. And as many businesses have unhappily discovered, using Google Voice is on the list. Here are 7 reasons why:

No Calls to Emergency Services

Shockingly, Google Voice does not support calls to emergency services. This enormous limitation alone should make it a non-starter as a business phone system. Picture this nightmare headline: “Business Fails to Call Fire Department Right Away Because Its Phone System Won’t Dial Emergency Services”.

When making calls with Google Voice, a business’s regular phone number does not appear on Caller ID. Instead, their Google Voice number appears. What’s more, the business name (CNAM) may not display. This not only makes the business look inferior to its competitors, but it reduces the chances of calls being answered. Research has found that the vast majority of people will not answer a call unless they recognize the Caller ID.

There are numerous reports (such as here and here) of people being unable to call a Google Voice number. For individuals, this is annoying and frustrating. But for businesses, it could be extremely costly — because it could mean losing customers to competitors.

With Google Voice, sometimes audio quality is good, and other times it is bad — for example, it may be riddled with static, lag, or echo. To make things even more frustrating, there is no way to analyze when audio quality will be better or worse. It is completely random.

Porting Numbers is a MAJOR Problem With Google Voice

Porting means transferring a phone number from one phone service provider to another. With Google Voice porting is a MAJOR problem, because several types of phone numbers cannot be ported. These include:

Furthermore, with Google Voice businesses are responsible for submitting manual port requests to one or multiple service providers. This is quite time consuming, and all of the information must be accurate or else the porting request will be delayed or rejected.

Technical Support With Google Voice is Slow, Difficult, or Non-Existent

Businesses that run into problems with Google Voice should not expect timely help. Instead, they will spend an excessive amount of time wading through a crowdsourcing platform. Yet, instead of (eventually) finding answers, they are likely to encounter comments from other frustrated Google Voice users.

Google takes Terms of Service (ToS) violations extremely seriously. This is a good thing when violations are legitimate. But what happens if a mistake is made, and an innocent user is alleged to have crossed the line? Google cancels the account without warning. Here is a very chilling tale from someone who had been using Google Voice in their business for many years:

“A friend wanted me to share a referral link to a mainstream app. I texted them the link, and boom completely cut off. The supposed reason? A mistaken claim by an automated system that I violated [Google Voice] terms of service. No warning at all. I’ve read the terms, that is not a violation…I tried to write several times now. Asking to at least let me port the number, trying to point out this is an error. Each time I get an automated response saying the account cannot be reinstate due to a violation of terms.

I have tried to explain in the form what is going on. Nothing but the same canned response. I now doubt any “Google Team” is reviewing anything. I suspect it is all an automated system with no human at all looking at what is happening…It is a huge hassle to clean up this mess of not having access to a phone number suddenly. I will never trust Google Voice with anything important again. I recommend anyone else do the same. They will lock you out in the cold for no reason, and have zero ways to talk with their team.“

The Final Word On Google Voice

In many ways — most notably its behemoth search engine — Google is an extremely valuable part of the business landscape. However, when it comes to delivering a business-grade VoIP phone system, Google Voice simply doesn’t do the job. Fortunately, there is a proven and affordable alternative: Carolina Digital Phone! Our affordable, flexible, feature-rich, and future-proofed VoIP phone system:

Learn more by scheduling a demo of our all-in-one VoIP phone system. Call us now at (336) 544-4000, or chat with us by clicking the icon on the bottom of your screen.